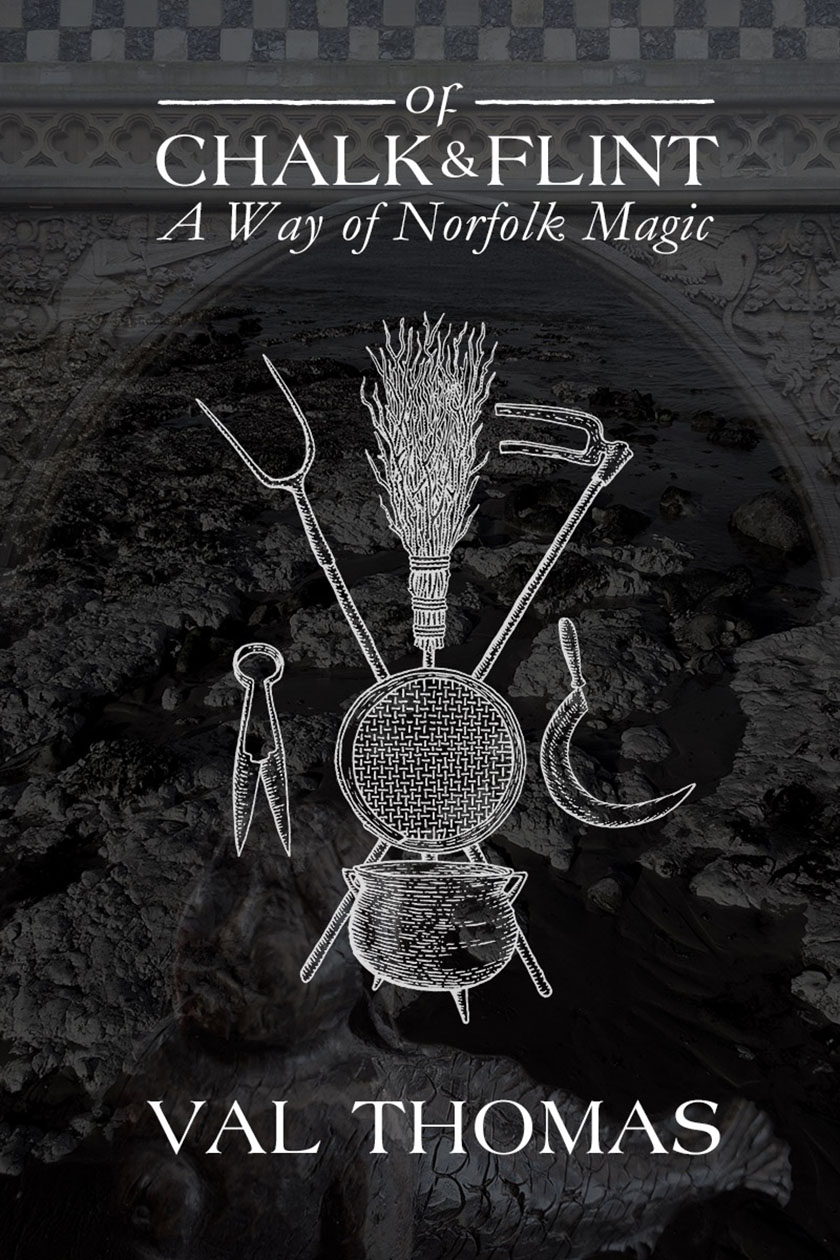 Val Thomas’ Of Chalk and Flint: A Way of Norfolk Magic was the first book I bought this year. And I have a feeling that it will be the best book I’ve read all year, or for many years!

Of Chalk and Flint is a large tome of magical information rooted in the chalk and flint of Norfolk, in East Anglia, UK. Though it is a sizeable book, the material presented within is honest, without pretention and still hugely informative without being academically dry. We get an insight into how those of the Nameless Tradition within Norfolk work, their vision of deity, of the powers of nature that surround them, of the times and tides, the history and the lore of this eastern county. Though I’m a Suffolk girl now, I used to live in Norwich, and then in Loddon, and I can relate to many of the places and the history presented in this book. It’s a wonderful and inspiring book, to get you deeper into your own tradition, wherever you live.

It begins by looking at the Lord and Lady of Norfolk, the deities represented in local form, the goddess and the god. Here in my part of Suffolk, the Lord of Flint is all around, on the heath and in the fields, on the shoreline and in the forests. The Lady of Chalk resides on the other side of the A12 from where I live, and so The Lady for me here is the Birch Lady, whose trees are everywhere, or otherwise the Lady of Sand, as the arid soil where I live is abundant, both on the heath, in the forest and beneath the shingle of the beaches. Thomas’ view of deity inspired me to deepen my own connection to the land where I live, to open my heart to the deities even more, and to know them by naming them.

The second chapter looks at sacred places, and consists of local lore combined with accounts of energies and magical workings that the author and others have enjoyed at various sites around Norfolk. We then move to Spiritual Beings in chapter three, where we are given the lore of such creatures as the merfolk and the ferishers (fairies), again which sing to my heart as near to where I live we have the tale of the Merman of Orford, as well as a host of ferishers, frairies, pharisees, faeries and more.

We then move onto the Quest of the Year, where the author in great and exquisite detail gives us an account of the seasonal celebrations, the flora and fauna that abounds, rites and ritual ideas from the Nameless Tradition of witchcraft. It makes you want to take up spinning, or whip up some homemade marmalade, or visit certain places at midsummer. Following chapters include materia magica, items that can be used in the Nameless Tradition, such as holey stones and the like as well as magical tools, working magic effectively, information on coven working and public gatherings and moots, and famous practitioners from Norfolk.

The way that Thomas writes makes you feel at home. It’s as if you’re sitting down to have a cup of tea with your favourite aunt, while she spins stories or thread on a spinning wheel. You can almost smell the herbs drying from the rafters, and feel the sun beating down on your head out in the Brecklands as you traverse the landscape. This book takes you through the wonder of this county like a friend would, and this is a friend I would trust wholly, for it is clear that she walks her talk, without arrogance or humility, but with a sense of pride in the natural lore, and an honest presentation that comes from the true wisdom gleaned from marrying intelligence and experience.

I cannot recommend this book enough. It is available from Troy Books. I may save up my pennies to buy a hard-cover copy, to treasure for the rest of my life.

2 thoughts on “Of Chalk and Flint – A book review”