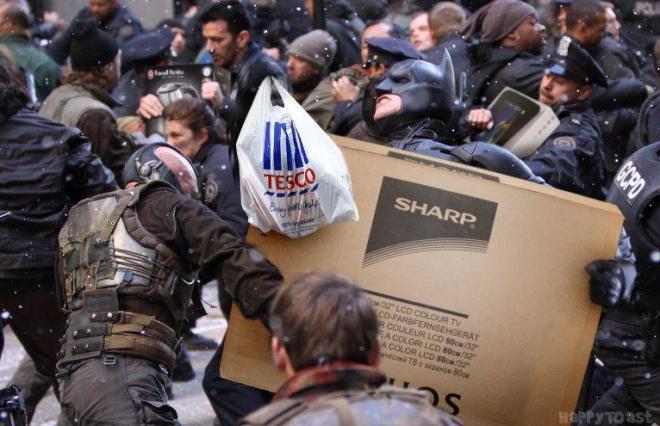 Black Friday – it’s upon us. The day after the American Thanksgiving, Black Friday is a consumerist holy-day that for many heralds the start of the shopping season. Yes, a season dedicated to shopping, sometimes called “Christmas”. It’s usually a four-day weekend for many, with stores opened all that time offering supposedly amazing deals. It’s a celebration of all things consumerist.

In today’s society, it’s more important to have things than to do things. We seem to be defined by our possessions, yet the term possession isn’t correctly used: for the most part, we are possessed by them, not the other way around. This is not to say that it’s wrong to have possessions, but when the desire to have them, to increase them, to fight for them is all-consuming, we need to have a rethink. When we’d rather have “stuff” than time spent with family and friends, when we work to accumulate more stuff, to buy bigger houses for all our stuff, to buy storage for our stuff, it’s gone too far. Our stuff owns us. The real kicker is, and we all know it: you can’t take it with you when you die.

Black Friday is supposed to be a consumerist’s dream, with bargain offers that are only available at that time of year. In actuality it is a nightmare of epic proportions, where many people don’t realise that the “bargain offers” are still far in excess of what the item is really worth. It only reiterates how much profit is being made on consumer goods by capitalist middlemen.

To make matters worse, Black Friday has resulted in 7 deaths and 98 injuries since it began around 2000. Yes, 7 people have died. Customers and employees crushed when doors are opened. People being trampled to death. An elderly man collapsing and everyone around ignoring him. Guns coming out at Toys R Us and shootings while waiting in the queue. Pepper spray being used on fellow shoppers. People being shot over parking space disputes. The list goes on.

What is so wrong with our society that this would happen?

People are starving, homeless, fleeing war-torn countries with nothing but the clothes on their back.

Join me tomorrow for a Buy Nothing Day. No purchasing; not online, not in person. Say NO to the sickness in society that drives people to hurt one another over a “bargain”.

We can extend it further, looking at how we spend our money, on what, why and when. Look at what are necessities, and what is not. Before buying an item, think about whether you need it. Spend 30 days before you buy something – by then you will certainly know whether you need it or not, or whether it was a whimsical fancy. Spend your hard-earned money wisely on things that will last. You worked hard for that money, don’t fritter it away on what the media tells you that you should have. Decide for yourself.

There are bargains to be had all the time. Charity shops are amazing places to find treasures of all kinds. And the money is going to charity, to actually do some good somewhere. Make every penny you spend count. Make every penny a vote for what you believe in, whether it’s buying local and/or organic food, investing in green energy, buying clothes for work. If you can, really consider the impacts of online shopping too – often items are wrapped in so much plastic, and shipped worldwide that the cost to the environment is enormous.

Our money can be our most powerful weapon against the serious issues of today’s society. We can use it for good, for the benefit of all, not just for one. We can make the world a better place. Really, we can.