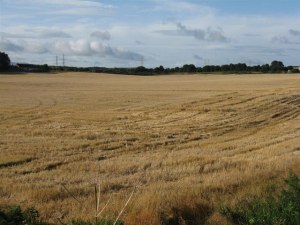 Sacrifice – it’s one of those “old” words, like honour and duty. Many who have read Roman accounts of the Druids associate the word, sacrifice, with the priest caste of the Celtic people at that particular time. However, the word goes even further back into the beginnings of time for the human animal, when the importance of relationship with nature was everything, when we knew that to disconnect ourselves from the natural world meant death. Today, we must remember this, remember each and every day how much we are a part of the world, how much our everyday actions count, no matter how small. Each day is also an opportunity to give thanks for the blessings that we have. At Lammas, however, just giving thanks doesn’t seem quite enough. When the first crop is harvested, and the land lies stark and naked, shaved and shorn from under the combine harvester, giving thanks and saying words over the field doesn’t feel adequate. This, for me, is where sacrifice comes into play.

It’s hard as the line keeps shifting between giving thanks and the notion of sacrifice. What might be an offering to one person might be seen as a sacrifice to another. I can only speak from my own personal viewpoint, as I may value things differently from my neighbours, my family, and members of my pagan community. So, what is the difference between an offering and a sacrifice?

For me, sacrifice is something of significant value. This is not necessarily a monetary value, but could be something that is cherished, prized, something that is utterly loved and which has a representative value of the threads of connection we hold with the gods, the ancestors, the spirits of place. What is it that I have which I value? What am I willing to give back in return for the flow of awen, that spark where soul touches soul and is inspired? What am I willing to do to achieve that?

When the barley in the field by my house is cut, the energy of the land drastically changes. Between the homes and the heathland there are two arable fields, one which was harvested in the spring for green barley, and one which still has the golden, bowed stalks waiting to be harvested. Acknowledging the change isn’t enough, for when we hear the songs of the ancestors, I feel how important these crops were for them, how important their relationship with the land meant their survival and success. In a field of growing barley, there is potential, a shimmering energy waiting to be harvested. When that field is cut, the potential can be scattered if the land is not honoured. The ancestors knew this, but we have forgotten. Modern farming depletes the soil of essential nutrients that must be replaced, often by less-than-natural means. The barley is cut, and the field then stands, barren and forgotten for weeks, until the farmer and his tractor are ready to plough in the winter or spring crops.

The land isn’t respected, isn’t acknowledged anymore. As an animist, I find this appalling. When the land has been used, has given us so much in a beautiful field of barley, and we don’t even give thanks, much less sacrifice then there is dishonour. As with any relationship, if one side continually gives and gives, and the other continually takes and takes, the balance will shift, the relationship will crumble and great suffering will ensue.

The sacrifice will change year upon year. What matters most is the importance of the sacrifice to me personally.

Offerings represent a more daily interaction, little gifts and niceties that you would present to any friend that you meet: a cup of tea, a biscuit, some of the fresh-baked bread you just made, or your home-brew mead. Finding out what the local spirits of place would like is as polite as asking your guest how she would like her tea: with or without milk, honey or sugar? When it comes to sacrifice, however, the shift of focus changes to become more introverted rather than extroverted.

I’ve previously in earlier articles described sacrifice as something that is not only of great value, but also as something that can help you “get to the next level”, so to speak. No, we’re not playing at Druids on World of Warcraft, but we are seeking to deepen our relationship with the land. Sacrifice is key in this regard, helping us to go deeper, to give more of ourselves in order to understand more of the land.

Many within the Pagan traditions see the Sun King as offering himself as sacrifice at this time of year, to be cut down as the grain is cut, to be reborn at Yule. Yet are we comfortable allowing the Sun King to do this each and every year, or should we also take our part in the sacrifice, participating rather than simply watching the cycles of life unfold?

And so I will spend the next few weeks walking the land, finding out what I can give, what I can do to deepen my relationship with it, to be an active contributor instead of a passive spectator. Some aspect of my self must be willing to die alongside John Barleycorn in order to understand the cycles of nature. Some sacrifice must be made.