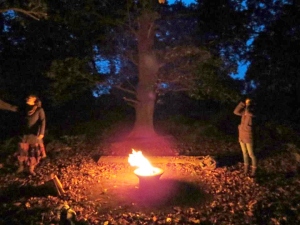 We’d walked up to the Celtic Iron Age burial mounds, just after the sun had set. Owls were hooting in the distance, pheasants squawking and fallow deer stags calling their challenge into the evening air. The sky held the last bright tinges of deep pinks and purples, and dusk had settled firmly in.

We went into the darkness beneath the oak and chestnut trees that grew around the burial mounds. There stood a firepit and some logs around it to sit upon. We had gathered some wood the week before, and now lit a fire, honouring its spirit. Saying our prayers to the ancestors, honouring our blood lines, the lines of our traditions and the spirits of place, we spoke softly into the night. We made our offerings and then sat in silence as the fire died, allowing the darkness to enfold us as we meditated upon the ancestors.

It was a simple, beautiful little Samhain ritual. No scripts, no plans other than bringing offerings, we were wholly and utterly in the moment.

Opening my heart and soul to the ancestors, I laid myself bare as I faced outside the firelight towards the burial mounds, saying my prayers and allowing my soul deep integration. Sometimes, however, it is not so good to forget oneself if one has been pushing too hard in their lives. Often, we can forget to take care of ourselves in order for us to function properly. We have to take care of the functional ego in order to let the representational ego fall away… and that means the functional body too.

The body lives in the soul.

And so, as we walked back down the bridleway, an old track that leads to other, later Saxon burial mounds made famous in the middle of last century by the discovery of a longship and treasure hoard, I felt a pain begin in my chest. I thought it was the mist that was rolling in, being quite susceptible to the damp after experiencing bronchitis a few times in the wet but wonderful land of Wales, where I had lived for a few years. I loved that landscape, but it wasn’t all that healthy for me to live in.

The pain in my chest only got worse as the night progressed, and into all the next day. I took it easy, but when on Monday I experienced numbness in my left hand it was time to go to the doctor’s straight away. Series of tests showed that it wasn’t a heart attack, thankfully, and there was no sign of infection either. All the doctors could say was that it was myalgia (muscle pain) in my chest.

I’d experienced this twice before, to varying degrees, and been to A&E for the same reasons, done all the tests and, when the pain died down, sent home without any explanation. After doing some research, I discovered Precordial Catch Syndrome, which described my symptoms perfectly all three times it had happened over the last 20 years. Perhaps this is what I have; the doctor’s don’t want to discuss it with me, however, ignoring it when I bring it up. It seems to be taken a bit more seriously in North America, at the very least.

At this time of year, I am reminded very strongly of our human strengths and our human weaknesses. Holding the wisdom of the ancestors close to my heart, hearing their songs, seeing the continuation of life in all its manifestations, through birth to death and rebirth, I can work through the physical frailties of this manifestation of my body. The last three years have shown a pattern at this time of year, at Samhain, where the frailties bring me to a new realisation: in 2013, I had chickenpox with a fever that broke through habitual thinking patterns; in 2014 my back went out and I was laid flat out for three days, unable to walk, discovering the limitations of body but not of mind. This year I came very close to my own mortality, with three long days of tests, waiting for results and wondering if there was something seriously wrong with my heart. It brought me even closer to death and my feelings around it. On a very personal level, I had to deal with the fear of death, though with the strength of my beliefs and the ancestors with me, it wasn’t so much fear as sorrow if this ride had to end suddenly, for I am having such a good time in this current manifestation.

One day I too will become an ancestor, but hopefully it will not be today. Today is a good day to die. But tomorrow is even better…

The ancestors are all around us. Traces of the ancestors of the past, of those that lived upon this land, whose stories are heard upon the wind, whose lives are still reflected all around us can be still found if we simply open our senses to them.  At this time of year, as at any other time of the year, I walk with the ancestors, yet when Samhain approaches the urgency of their presence seems to fill my mind. I feel such a strong connection to the ancestors, of past, present and future.  A simple walk to the pub reveals the very real existence of the ancestors on the land where I live.

The Suffolk landscape is often synonymous with Saxon culture and history, from the graves at Sutton Hoo to the palace/village/town found in Rendlesham forest. But echoes of those who were here before the Saxons, the Celtic tribes still remain.  Though the term Celtic is currently undergoing much investigation, there is still much evidence of Iron Age life (and even before that) in this landscape from those who lived here, fished these rivers, walked this sandy soil.  When we think of the Celts today, we most often think of Ireland, Scotland and Wales.  But here in the East of England the ancestors are all around us, from the history of Boudicca’s uprising to the gentler, untold stories of daily life in the marshes and heathlands that abound in this land.

A simple three mile walk to the pub can reveal a very deep connection to those who have gone before, and who are still present all around us. 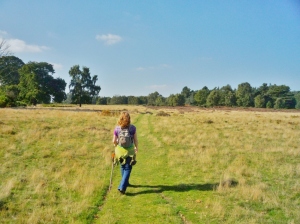 With every footstep, we walk with the ancestors.

Buried beneath this farmer’s field is a henge.

View of the heath from burial mound. 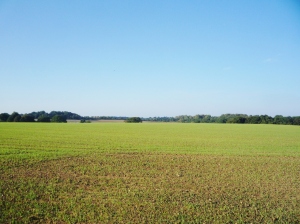 Site of Iron Age village, half a mile away from the burial mounds and stitting atop a hill, now a farmer’s field.