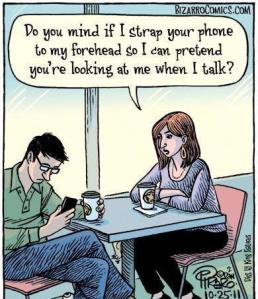 Social media today has led, as many are probably aware, to a serious decline in face to face interaction.  We are a social species, and everyone needs a little social interaction.  What I am discovering more and more is that people are forgetting, or never even learning, the niceties of a social situation – standing in line at the fairtrade coffee house and actually making eye contact with the person in front/behind you, maybe even smiling and talking to them.  I think we all, to a certain degree, need a little social interaction – face to face, even if we are self-proclaimed “not a ‘people person’”.  We are in dire peril of losing all our social graces. And yes, I do realise the slight hypocrisy of making my views aware on an online blog. 🙂

Last month when I went out to dinner with my husband and father in law, I noticed a couple at the table next to us.  They barely said two words to each other – either one or both spent most of the time on their mobile phones – not talking to other people on the phone, but presumably doing something with an app, or most likely checking social network sites.  I was truly saddened by this.  How many people spend their lives, head down, looking at a small screen to catch up with the latest? What about the world going on around them?

A few months before, in a crowded bar my friend and I asked to join a couple of lads at their table, as there were none free and my back was hurting – I needed to sit down.  They kindly agreed, and spent most of the time talking to themselves – fine, I wasn’t looking for conversation with them at any rate.  However, when one went to the bar to get drinks for the both of them, and my friend was also at the bar, I was left alone with one of the lads.  As soon as he was left alone, he went head down to his phone, completely ignoring everything and everyone around him.  Same thing happened at my local pub, sitting at the bar and chatting with the bartender and the bloke next to me – as soon as she left to get an order the bloke next to me put his head down and went straight for the phone.  Why go the pub at all?

What I worry about is the ability to interact with people in real life situations seriously declining.  Mere politeness is on the decrease, as any walk down a busy London street can testify.  I’m not expecting an ethical debate on animal testing, or politics, or whatever from someone standing in line with you, but what I would like to suggest is to put down the phone and at least acknowledge the person near you. Or at the very least, put the device away when you are walking down the street – a friend of mine nearly got run over last year because he was checking his phone.  How many phone related accidents do we need to hear about? Be aware of your surroundings.

One of my work colleagues told me of his New Year’s resolution last year, which I thought was brilliant.  He resolved to never pretend to not “see” somebody – to always acknowledge.  He thought it was really empowering  and I could see why – even when someone has pretended not to see you, you still go up and say “hi!”.  This most basic acknowledgement is such a small, yet significant thing.

Life is happening all around these people who are addicted to their phones, or tablets – using them to block out the world, or to avoid a social situation in which they are not comfortable. But really – it’s not that hard.  Someone isn’t going to bite your head off for smiling at you as you pass them in the street, or waiting in line at the shops.  Even if you are terribly shy – just try it.

I do wonder if there is a serious mobile phone addiction – a couple of days ago I saw a young couple walking out the door of a local recreational pool, both with phones in hands in case anyone should ring them – ready to answer at a moment’s notice.  Are they really that important? Are the callers? What about each other? Is this not a statement that whoever might ring them is more important than the person they are currently with, in person?

I’m sure I have some sympathisers – people who hate it when they go out to the pub or for coffee with a friend, and the friend puts the phone down on the table, right in front of them, face up, in case they receive a Facebook notification, an email or a call.  When I am with someone, I am with them. Fully. I think that anything less is rude, and a little saddening – judgement call, I know.  I really am attempting to understand rather than judge, but I realise I am failing in understanding – unless it truly is an addiction.  What do you think? Are people addicted to their phones? If so, isn’t there something we should do about it?

Lives are being wasted away.  If you are a person who always has their phone on, may I suggest you turn it off for a day, then two, then a week.  See if you have truly missed anything.  Don’t check Facebook for a day, then two, then a week, and again – did you really miss anything?  Be with the person you are with.  Acknowledge others around you.  Take that damned phone off the table and look the person in the eye.  Be there. Awake. Aware.

10 thoughts on “Face to Face or Phone to Phone?”