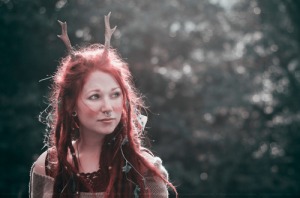 She is the Lady of the Wildwood.

Hidden in the shadows of the trees, she watches you with eyes millennia old. You may catch a brief glimpse of her, and then she is gone, flitting silent as ghost amidst the snowy boughs, disappearing in a heartbeat.

She is the heartbeat of the wood, of the wild places, of heathland and moorland. She dances under the moon in star-filled skies, her dance exhilarating and free. And in the blink of an eye she is gone, lost in the mist that slowly curls over the land in eloquent drifts.

She is called Elen. Not much is known about her – she seems to have escaped the history books and academia of the human race. She knows this, and it pleases her greatly. You cannot know her without seeking her out, in the wild places, in the darkness and in the light, in the heat and in the cold. She is to be experienced, not to be read about.

She is an antlered goddess, her antlers showing her free nature spirit. Her hair is long and red, often with twigs and leaves entangled – sometimes plaited back in a long braid down her slim back. Her limbs are white – they glow in the shadows and shine in the moonlight. Her green eyes, full of mischief, hold the secret of the Ways.

She is Elen of the Ways, of the trackways and paths that cross both nature and the human soul. She is a physical deity – you must put one foot in front of the other if you are ever to know her. If you are lucky, you can find the ancient pathways she had trod, leaving her energy behind, enticing you further, deeper into the heart of the wood, where the mysteries lie.

Follow the footprints – in the snow, in the mud, in the sand. The cloven hoof of the deer will lead you to her. They are her children, they are Her. Like the deer, she is grace and strength, she is trusting and wary, she is capable of great stillness and explosive action. She is curious and wise, and she will beckon you further in if your heart is open.

Not much is known about Elen, a patron goddess of mine. I seem to be attracted to deities who have little written knowledge about them – Nemetona, goddess of sanctuary, is the other to whom I have given my heart and soul. Nemetona is a holding deity – she creates a space where we can simply be – Elen is a wild deity, running naked over the heather in wild abandon.

I’ve always known Elen, though I did not have a name for her. I’ve always known and felt her spirit with me, deep in the woods, wherever I am in the world, eyes watching me. She is strongest here, but I am sure that she is strong elsewhere in Europe – so many countries to visit and learn about. But here, in the east of England, where her children, the deer, run free is where I have found her. This is where I have come home, literally and figuratively.

More and more people are finding out about Elen – a friend of mine does an Immerse in Elen Retreat once a year, which is gaining ever increasing popularity, as well as a Reunion for previous attendees.
The group on Facebook for Elen of the Ways has 360 people and counting – more and more she is becoming known. But she is a deity that must be experienced – not talked or read about.

And so I would encourage you – if you feel your soul spreading out, your nemeton relaxing when deep in the heart of the wood, or out among the wild places where the deer roam, that is where you can seek and, if you are lucky, find Elen. Look for the flash in the shadows at sunset, the glimpse of an antler. When you have found Elen, you will know it, and be forever changed.

To find out more about my writing, please visit my author page at Amazon, where you will details on the No.1 bestseller, The Awen Alone: Walking the Path of the Solitary Druid, as well as new releases such as Zen for Druids and my upcoming book, The Crane Bag: A Druid’s Guide to Ritual Tools and Practices available July 2017.