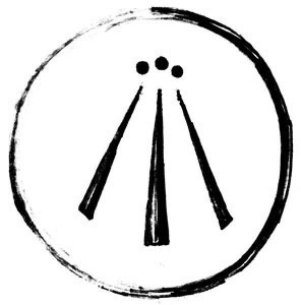 The awen symbol is based on an original design by the 18th-19th century Druid revivalist, Iolo Morganwg. It consists of three lines falling to the right, centre and left. Modern Druidry incorporates the original source point of three dots, which can either be seen as points of light or drops from the cauldron of the goddess Ceridwen. The awen symbol represents, among other things, the triple nature of the Druid path, incorporating the paths of Bard, Ovate and Druid. It is not an ancient symbol, but a modern Druid symbol, used widely by Druids the world over, regardless of their opinion on Iolo and his work.

The first recorded reference to Awen occurs in Nennius’ Historia Brittonum, a Latin text of circa 796 CE.  “Talhearn Tad Awen won renown in poetry” is where we first see the word, and it tells us that Talhearn is the ‘father of Awen” in this instance. Sadly, this source tells us nothing more about Talhearn as being the “father of awen”, but perhaps later research may discover more clues about this reference.

A common translation of the Welsh word awen is “flowing inspiration” or “flowing poetry/poetic insight”. Awake to our own energy, and stretching out towards the energy of nature around us, we begin to see just what is the awen.  It is an opening of one’s self, of one’s spirit or soul, in order to truly and very deeply see and connect to all life around us.  When we are open, we can receive that divine gift, the inspiration that flows, whether it is from deity, nature, or whatever it is that you choose to focus on.

For awen to exist, there must be relationship.  We cannot be inspired unless we are open, and we cannot be open unless we have established a relationship, whether that is with the thunder, the blackbird or a god.  It is cyclical in nature; we open and give of ourselves and in doing so we receive, and vice versa.  Letting go, releasing into that flow of awen allows it to flow ever more freely, and we find ourselves inspired not only in fits and bursts of enlightenment or inspiration, but all the time, carrying that essence of connection and wonder with us at all times.  There is, of course, a line to be drawn, for we can’t be off our heads in ecstatic relationship with everything all the time. As with all language, a literal translation can be far too limiting.  It’s good to have a context and some sort of description to relate the concept, but when confined to literalism we get stuck and are unable to see the bigger picture. Awen does mean flowing inspiration, but what is inspiration?

When soul touches soul, there is an energy; a source of inspiration.  When we are aware of our soul interacting with other souls, we can harness that inspiration and see it in everything that we do. It doesn’t just happen every now and then, like a bolt out of the blue, but rather is in everything that we do. It requires a willingness for deep relationship, and a desire to be mindful in all our relationships.

This may sound a lot like Eastern philosophy; being very mindful. Mindfulness has become a large part of many Eastern philosophies, but I am sure that it has been around as long as human self-awareness has been around. Indeed, it may have been a large part of ancient Druidry, now lost to the mists of time. Taking inspiration from Eastern traditions with regards to our way of thinking is not much different to reading the works of Nietzsche or Plato. There is no monopoly on wisdom.

Mindfulness relates to awen in that when we are aware of our relationship to the world, when we see how we fit in the world then we can work in harmony with the world. We become an integral and integrated part of an ecosystem, where we know that everything that we do matters to the system in its entirety. The discipline gained from such mindfulness as practiced in the Eastern traditions and philosophies can be a great teacher in expanding our minds and helping us to learn more about ourselves. That also goes for other religions and philosophies as well. I’m sure the ancient Druids, just as much as Modern Druids today, loved reading about world religions and discussing philosophy.

There is a lot of talk about cultural misappropriation, however, in modern Paganism and it’s something that needs to be carefully considered. We do have to be aware of when we are taking something from another culture without its proper context and permission. Nevertheless, with religions or traditions such as Buddhism, for example, the Buddha said that enlightenment was for anyone to achieve, available to all, regardless of where they came from, whatever their background.  It’s why we see so many different forms of Buddha being represented in sculpture. We have fat Buddhas from China, giant slim standing Buddhas in India, reclining Buddhas in Burma, sitting Buddhas carved straight out of the rock temples in Sri Lanka, elegant bronze-plated Buddhas in Japan and so on. In each country the Buddha looks different, as Buddha is within each and every person as well as having been a person in his own right. There is even a female Buddha known as Tara in Vajrayana Buddhism.

You will find that Druidry has much in common with many other Earth-based religions the world over, as well as many philosophies, both ancient and modern. We can be inspired by these and let them help us to change our perception, our way of seeing the world, from a self-centred point of view to a more holistic worldview, from a less human-centred perspective to one that is more integrated. In that, we are living the awen.

Awen is that spark set off by interaction, by integration.  We do not exist in a bubble. We are surrounded by the world at all times, by the seen and the unseen.  When we live integrated, we see the meaning that each relationship has, and that inspires us to live our lives accordingly. That inspiration is the heart and soul of Druidry.

Inspiration: to inspire, from the Latin inspirare, the act of breathing.

Indeed, it has many connotations to the breath and breathing. Awen can connect us to the world through the very act of breathing. All living things breathe in some form on this planet. The human species shares this breath, breathing in the oxygen created on this planet and exhaling it into the twilight. The air that we breathe has been recycled by plants and creatures for billions of years. The breath is the gateway to the ancestors, and to a deep understanding of the nature of awen.  Awen is also shared inspiration, for we share this planet with everything else on it. Everything that we do has an impact, every breath we take, every action that we make. Breath links us to everything else.

When we remember that deep connection to everything else, we cannot help but be inspired. And we hope to inspire in return, much as our own exhalation is valuable to trees and plants who take in the carbon dioxide, turning it to oxygen for our own breath. Inspiration and expiration, inhalation and exhalation are all words for the act of breathing. Remembering the shared breath of the world, we come home to ourselves and rediscover the wonder and awe of existence. Then, we are truly inspired.

More about the awen in Part Two, coming up…

(This blog post is an extract from my book, The Book of Hedge Druidry:  A Complete Guide for the Solitary Seeker.)