Below is a fairly recent interview (March 2014) with Emma Restall Orr, author, founder and director of Honouring the Ancient Dead, and former Head of The Druid Network. Here, she is talks about Druidry, labels, the priesthood, anarchy, understanding the self and the importance of earth-based religions. Enjoy!

Druid Camp was, once again, a wonderful experience. Though we were only there for Friday evening and Saturday, leaving early Sunday morning, it was an enriching time filled with laughter, good friends, a coming together of a tribe and community, and an honouring of the land. The focus of this year’s camp was environmentalism within a spiritual context.

We arrived Friday just after 7pm, after horrendous traffic on every single motorway – it took us over seven hours to get to Camp from the Suffolk Coast – three hours longer than usual. School holidays had just begun. We checked in and then hastily made our way to the ritual circle, where Phil and Ness were being handfasted. They had met at Druid Camp years ago, and were now taking their vows and pledging their love to each other, with the tribe and community acting as witness. It was beautiful.

Later that evening, Arthur ZZ Birmingham and then Ushti Baba, a gypsy/ska/folk band got the crowd on their feet and we danced the night away.

Saturday began with a lovely yoga session led by Theo, which worked out all the kinks from the night before and set us up perfectly for the day, followed by circle dancing. The morning meeting followed, where the next two days were laid out before us with an array of choices to make, which workshops to attend, and what was taking place where. The afternoon ritual was then planned, which I will come back to in a moment.

The marketplace at midday was the biggest I had ever seen it. Beautiful crafts and homemade wares were on display, as well as books, second hand clothing, incense, ritual gear, meads and wines. Arthur ZZ Birmingham led an improvised band (and I joined in on my new doumbek) and played some great blues tunes in the heat of the midday sun.

Mid-afternoon the healing and divination area was in full swing, as were the talks and workshops. I went to Brochfael’s talk on ethics within Paganism – something which I’ve been exploring quite a bit on this blog lately. Ideas were exchanged and points of view shared in a brilliantly painted teepee, with Will delivering his talk before a tableau of a red dragon dancing in the light of the sun.

Saturday afternoon’s ritual focus had an astrological bent – Mars in the various zodiac signs. Though I’m not a great believer in astrology, it did provide an interesting framework for ritual. The idea was that one woman would represent Boudicca, discovering and learning her warrior aspect as she dedicated herself utterly to the land. She was to move through the houses of the zodiac in which Mars resided for all ritual participants. Every single ritual participant was divided up into groups based upon which sign Mars was in for their own person – for me, Mars was in Virgo. The groups would then challenge and provide Boudicca with what she needed for her journey.

When the time came for the ritual, Mark Graham opened the circle and the woman who was chosen to play Boudicca entered, looking every inch the proud warrior queen, even down to the flaming red hair. Each house of the zodiac presented her with challenges and gifts, wisdom and advice as she progressed through the circle. It was so inspiring to see the creativity of everyone, wherein each group was so different and so unique, yet coming together to create a single ritual of great beauty.

After Boudicca (who was played by a woman aptly named Victoria) had processed and been blessed by the tribe in her protection of the land, everyone came together in the circle, chanting words dependent upon their ritual designation within the elements of earth, air, fire and water. The words flowed through each other in exquisite awen, as everyone circled and chanted, sang and set their hearts free in love of the land. I was quite overcome at this point, with the seagulls flying overhead, the wind upon my skin, the earth humming with energy beneath my feet and the waters of the Severn River encircling us upon this sacred hilltop. My love for this land and for the planet, the Earth itself, overwhelmed me and tears began to slide down my mud-stained cheeks as I called to my gods, opening my heart and soul to them in utter dedication and devotion. On the outer edges of the circle, I felt a great need to connect more fully with the earth, and dropped to my knees to lay my hands upon the sacred soil. Thankfully, those in the middle of the circle soon felt a similar need, and I was not trampled under Druidic feet! Everyone in the ritual knelt down to the ground, bringing their foreheads to touch the earth in peace and love, dedication and devotion to that which holds us so utterly and beautifully in the world. A selfless love flowed through me for the entirety of the world in a rush of pure, divine awen, and I tried not to sob out loud at the release.

After the ritual I made my way back to my tent, to process and integrate what I had just experienced. My husband and I then went out for dinner at the local pub, and coming back I meditated alone (in a field of sheep, so not entirely alone) watching the sun set over the hills within a bank of cloud, the crickets singing around me and the finches twittering overhead. Utterly spent, we had an early night that night.

Sunday we went for breakfast at the café, and had a great breakfast discussion with friends old and new about what they were working on in university, on gender roles and personal life experiences. This is what I love about Druid Camp – such engaging and brilliant discussion over beans on toast.

Then it was time for the long journey home towards the North Sea coast. Coming at last to our home, smelling the familiar scents of heath and forest, of sea and sky, I sat in my backyard by my altar and honoured the land upon which I live, connected as it is to all of the British Isles and the rest of the world. I said a prayer for peace, and reaffirmed my dedication once again to my gods, with the spirits of place and the ancestors as witness.

I can’t wait to see what will happen at next year’s camp.

Brochfael’s talk on Pagan ethics in the painted teepee, or is it a hobbit about to be eaten by Smaug??? 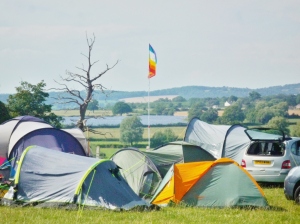 Solar panels in the distance… how apt… 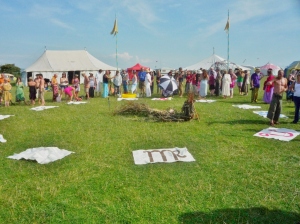 The astrological houses for the big ritual on Saturday afternoon…

My favourite tepee in the whole world…

Experience a weekend filled with devotion to the gods, the land and the ancestors – with prayer, meditation, discussion and ritual, as well as visiting sacred sites such as Glastonbury Tor and the White Spring on this unique retreat, The Little Pagan Monastery.  Stay at Chalice Well & gardens, at Little St Michaels where you will have 24 hour access to one of Albion’s most sacred places during your stay.  Incorporate daily prayer and ritual into your life, make new friends and enjoy some time spent away in an inspirational setting with like-minded people.

Wishing you all a very Happy New Year. Thank you all so much for your support with this blog – it has truly stunned me to see all the comments, views and other blogs posts shared here.

In 2013, Octopus dance had over 18,000 views, from 92 different countries.  Thank you so much for sharing your creativity, for being the awen, and for allowing me to share mine.

“Instructions for living a life.
Pay attention.
Be astonished.
Tell about it.”
― Mary Oliver

“to live in this world
you must be able
to do three things
to love what is mortal;
to hold it

against your bones knowing
your own life depends on it;
and, when the time comes to let it go,
to let it go”
― Mary Oliver, New and Selected Poems, Vol. 1

“Keep some room in your heart for the unimaginable.”
― Mary Oliver

Many, many blessings to each and every one of you, and may your journey in 2013 be filled with the wonder that is truly living life, and filled with the awen. Remember – don’t just go with the flow – be the flow itself. x