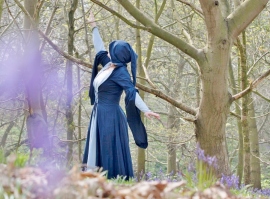 What to wear in ritual? Whether you’re a Druid, a Witch, a Wiccan, a Heathen or from any other path this question often comes up. The simplest answer is: wear what you like. However, let’s go into more detail, for the sake of this blog post!

I come from a Druid/Witch/Wiccan background. When I first began on my Pagan path, I performed my solitary rituals either in the nude or in robes that I had made. It all depended upon the season, the intention of the ritual, and practicality of it all. Some indoor magical workings and rituals I would do without a stitch on, as I felt that was most appropriate. As well, having just come out of a ritual bath, it was easy! I have also done some solitary outdoor rituals in the nude, such as honouring the solstice while dancing outside in the warm rain, away from prying eyes. The feeling of the warm, humid air and the rain on my body were wonderful, and is an experience that I will always remember and treasure. However, that ritual was performed during a Canadian summer, where the temperature soars to a very humid 32 degrees, and wearing anything or even moving causes one to break out in a sweat. It was also raining, which meant the bugs were in hiding, and the mosquitoes and blackflies which would otherwise eat me alive were not present.

In a British summer, things can be very different, and four seasons in one day is not uncommon. As well, there are less wild places to be in Britain away from prying eyes, as there are just so many more people on this tiny island than there is spread out across the vastness of Canada. Working in the nude can be extremely liberating, and many of modern Paganism’s leading people such as Wicca’s Gerald Gardner and Druidry’s Ross Nichols were firm believers in naturism: that being unclothed in nature had great benefits to one’s physical and spiritual health. However, in my opinion it can also be cold, uncomfortable and inappropriate.

It is entirely your choice as to how you wish to dress, or undress for ritual. If you are performing it in a public place, then you must remember that in most countries, it is illegal to be nude in public. The laws and the sensitivities of others must be taken into consideration. Some would argue this, such as those who at large Pagan festivals prefer to walk around naked, but I feel that this is inappropriate for many. We do not know everyone’s story, and so to be confronted by a naked person can be very upsetting for some people. There may have been past sexual abuse, or ongoing abuse in their lives. We have to think of the repercussions of our own actions and behaviour, how they will affect others. We are still able to express ourselves in freedom, without upsetting other people. 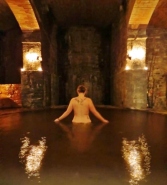 The last time I was as the White Spring in Glastonbury, it was open to the public and three women went in the main pool (not the bathing pool, I might add) and performed a ritual there in front of everyone with two of the three ladies completely starkers. While that may have been appropriate for a private ritual, when the public are also walking around it is, in my view, highly inappropriate to do so. Imagine a nun from France visiting, or a young schoolgirl who is asked by her teacher “What did you do this weekend?” and she replies “Daddy and I went to the White Spring and watched naked ladies in the water”. I have performed private ritual at the White Spring in the nude with friends, and it was absolutely lovely to immerse ourselves in the sacred and very, VERY cold water (we had to use the main pool, as the bathing pool wasn’t in existence then).

Here in Britain, it is highly unlikely that I will perform any ritual naked out of doors. Even my backyard is overlooked by neighbours either side, and so I keep my clothes on. As well, it’s usually too cold to go out romping in my birthday suit. I completely understand why some people feel the need to do ritual naked, but I don’t see the point when it is illegal, uncomfortable or inappropriate.

Making your own robes can be a richly rewarding practice. There are many simple robe designs that you can find online easily, and all you need to do is have some fabric and a little skill with a needle and thread. I would suggest using fabrics that are natural and that don’t have any man-made material in them if you plan to wear it in ritual, and they are lying next to the skin. Rayon for instance has a tendency to melt onto the skin if caught in a candle’s flame. Also robe designs with big bell sleeves are a no-go for anyone working with fire. No one wants a human torch as part of the ritual!

Many people like the old-fashioned appeal of robes for ritual, feeling that this harkens back to a time that seems more magical than today’s modern age. However, plain comfortable modern clothing can also be appropriate for ritual, if you have no desire or skill to make your own robes. We don’t know if our ancestors, whether they be witches, druids, heathens or whatever dressed in different clothing for every magical working or religious rite. They may very well have worn whatever they were wearing that day, that week, that month (depending on how often they changed their clothing). 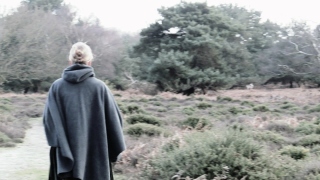 When I am trudging out onto the heath for ritual, I wear good boots as I live in adder country. I usually also wear trousers such as jeans that have a heavy material which the gorse cannot penetrate, or at least knee-high boots that can ward off most of the pricks and thorns. I like the dress in natural colours, mostly greens lately as I find this personally pleasing. Green is also a colour associated with the faeries and the Otherworld, and in my current work is very appropriate.

In group ritual, sometimes those organising ask people to come along and dress in specific colours that honour the festival or season. Midsummer might be in fiery hues, for example. Some may wear modern clothing in the appropriate colours, others go for full-on gowns or robes. Either way, this is a nice way to get people together with a certain theme in mind and create a sense of community and harmony, whether you are in modern clothing or ritual robes; at least you’re somewhat matching. Much like making your own robes, doing this can also put you in a ritual frame of mind long before you have left the house. You are already thinking about the ritual as you are choosing or making your clothing. The ritual, indeed, has already begun.

Some people like to wear clothing that is true to ancient times according to their tradition. This can be wonderful way to connect to the ancestors. It is also a lot of fun! Many people who are involved in re-enactment organisations and who are also Pagan like to use this as a theme for their ritual garb. Reconstructionist paths do much the same. 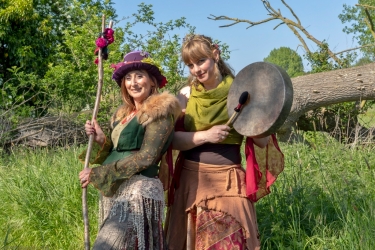 The most important thing is that you like what you are wearing. Even if it is a simple piece of ritual jewellery that you can hide underneath your shirt, if that pleases you then wear it wherever and whenever you do ritual. Being comfortable is also a big factor, as being hot and uncomfortable, sweaty or cold is not really all that conducive to productive ritual. Let what you wear (or don’t wear) reflect your true self, in accordance with the law and propriety. And most of all, let it be fun and enchant you, and be a contributing part of the ritual if you so wish.

9 thoughts on “What to wear? Ritual Clothing…”