This morning my Facebook feed was filled with lots of lovely people wishing everyone a happy winter solstice. So nice! And yet, there were just as many people correcting them, stating the the actual astronomical time is tomorrow, etc, etc. Let’s all just relax a little bit, and celebrate whenever we can, wherever we can, and however we can without the need to tell people that they’re doing it wrong.

So happy Winter Solstice for today, tomorrow and Monday!

Hello everyone! This is just a quick note to say that the audio/audible version of my latest book, The Book of Hedge Druidry, is now available! I’m very pleased with how this turned out – have a listen to the sample, and see what you think 🙂 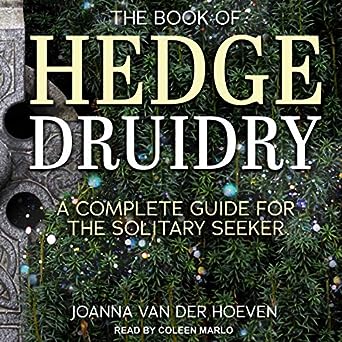 Hi everyone! I hope you like this video, and I’ve got more coming up in the next few weeks. I plan to have a Heathenry/Northern Tradition video soon, as I’ve had enquiries for more information on that subject. Thank you all so much for your support, and please do check out my Patreon page!

What a trip! Had a brilliant time, and looking forward already to next year. I’ll be doing more pilgrimages to various sites over the next year, so please consider becoming a Patron to support my work! https://www.patreon.com/joannavanderhoeven

Thinking of magic and the liminal, the ancestors and the power of fire this night. Blessings to you all 🙂

The moon has always held a special fascination for me. Everything seems magical under the silvery moonlight. Here is where the magic happens.

We’ve been filming today for the next video in the Witchy Ways YouTube series, and I have to say, what a glorious day it has been! Full of the beginnings of autumn’s joy, it’s melancholy, it’s beauty and introspection. My absolute favourite season.

Hi all! This is just a quick note to let you know that I have a new Patreon page, where you can help support the work that I do across various forms of media. I’m about halfway through a video series on Modern Witchcraft, entitled “Witchy Ways” on my YouTube channel, and am looking forward to recording and editing some more videos soon. I’m also recording the next audiobook which will be available on my Bandcamp page and I’m hoping to put up a new podcast series there as well. As well, I’m still trying to contribute as much as possible to my blogs, here at Down the Forest Path and at Pagan Square, which all takes quite a bit of time! An author’s income is not a heady one, so I’ve diversified and am enjoying using other forms of media.

You can start from as little as $1 a month; simply enter the amount you wish to provide when you click on the “become a patron” button.  And so, if you can support me across these endeavours, it would be greatly appreciated!